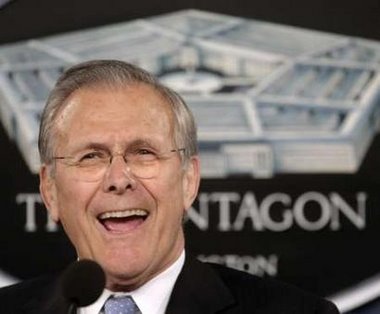 Rumsfeld is the man the left loves to hate and I think they hate him all the more because he doesn't hate them back. Gateway Pundit has a great post up that defends Donald Rumsfeld. I would have to agree that historically Rumsfeld may be the best Secretary of Defense ever.

One question that never seems to get asked in all this "Rumsfeld must go" nonsense is the question of "who would replace Rumsfeld"? Who is out there that would satisfy the left and get confirmed? I can't think of anyone who would want the job who could get confirmed without promising immediate troop withdrawal from Iraq.

It seems to me that anyone who suggests that Rumsfeld has to go should be required to answer the question "And replace him with who?" My guess is 9 times out of 10 the person would have no response ready.

That in itself seems typical. The left likes to say the Republicans are doing things wrong but you never seem to hear them explain what their plan is to do things differently. (Remember all those secret plans John Kerry had during the Presidential campaign?) The Democratic Party recently seems to be going through a slogan a week. I suggest that they stick to this one:

The Democratic Party - Everyone's a Critic

Posted by chris at 7:55 AM
Email ThisBlogThis!Share to TwitterShare to FacebookShare to Pinterest