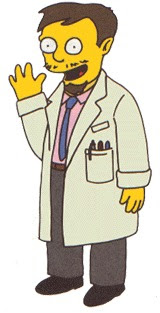 (Today ALR is lucky to have a special Thanksgiving guest in to make the football picks and that guest is none other than Dr. Nick Riviera from The Simpsons. Without further ado – we turn things over to Dr. Nick.)

Hello everybody! The first game we have today is Miami at Detroit. Miami is giving 3 points. I’ve always liked Miami since my days of med school in the Caribbean. I have to say that if I were a GM of a major sports team – I would be the Matt Millen of GM’s. That’s why I’m putting my money on the Dolphins. Pick – Miami.

Next up is the Tampa Bay Buccaneers against the Dallas Cowboys who are giving the 11 points. I must tell you that every time I see Bill Parcells at a press conference – I think to myself, “Calm down old man, you're going to give yourself skin failure!" The 11 points look like too many points so I’m going to recommend going with the Buccaneers. Pick – Tampa Bay.

This year the NFL has a bonus game matching up the Denver Broncos and the Kansas City Chiefs who are giving 1.5 points at home. If I were an NFL coach then I’d probably be Rich Kotite but Herm Edwards would be my second choice. That’s why I’m taking the Broncos. Pick – Denver.

There is also a college game tonight that has Boston College going against Miami in Miami with BC giving 4.5 points. I know I said earlier that I love Miami but I have a history with the University of Miami. I became quiet close with the players there after they learned that I can prescribe anything I want. From knowing the players there I realize that this game is the only thing keeping the Miami players from partying the rest of the year. The Eagles, however, need this game if they want to win their division in the ACC and go to a major bowl game. Boston College also deals with real doctors and that’s why I like the Eagles to win this game. Pick – Boston College.

Happy Thanksgiving everybody. All right! Free nose jobs for everybody!! See you in the operating place!
Posted by chris at 10:41 AM
Email ThisBlogThis!Share to TwitterShare to FacebookShare to Pinterest