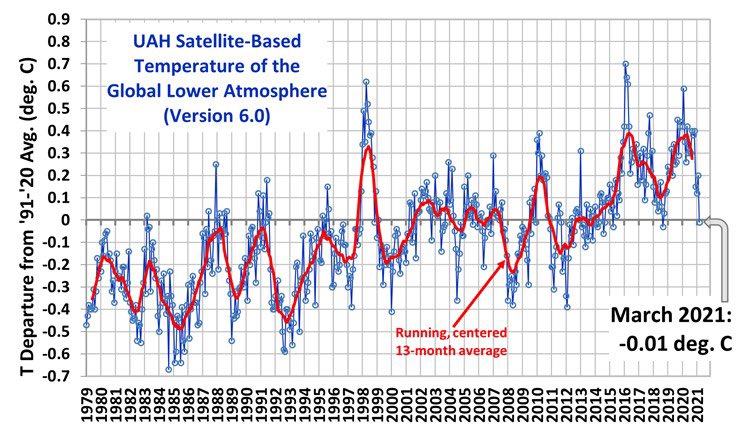 The above graph shows that according to satellite based temperature readings the world is on a warming trend. However, the rate of warming is nowhere near the alarmists predictions of most "experts" models.

You could also see that if you averaged out the 42-years shown on the graph there'd be no increase at all. That's just to show that you could make the stats show what you want. Secondarily 42-years is nothing when it comes to plotting the historical nature of the Earth.

One final thought I'd like to get out of my head - who's to say a little warming isn't a good thing? I live in New England and would personally welcome slightly warmer weather. Also warmer temperatures could also mean that the Plains of Canada, Siberia, and Mongolia would be able to produce more crops to help alleviate any global hunger. Wouldn't that be a good thing? The warming period during Medieval times gave rise to the Renaissance - wasn't that a good thing? And back then fossil fuels had nothing to do with the rise in temperatures.

Posted by chris at 11:30 AM
Email ThisBlogThis!Share to TwitterShare to FacebookShare to Pinterest
Labels: climate change, global warming