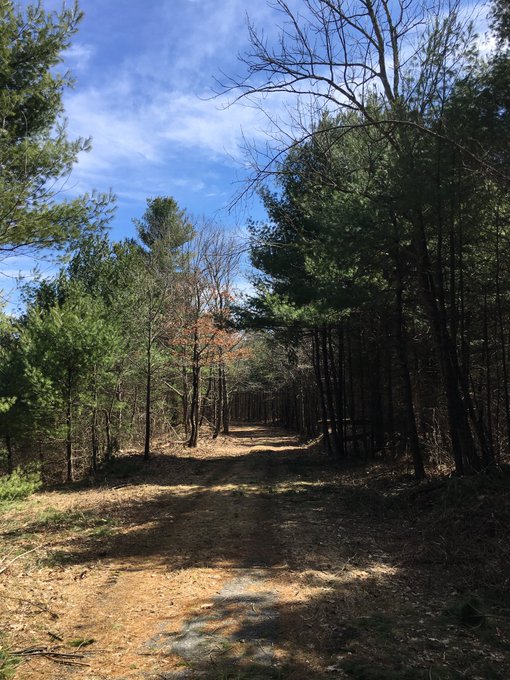 When I did my list the other day of changes we'll see after the Wuhan virus there was one more thing I was going to add - people discovering and enjoying the great outdoors.

Yesterday I went for a hike at Gate 40 on the Quabbin Reservoir in Petersham Mass. I've hiked this set of tails many times and normally there may be a couple of cars in the parking area. In the past the most I had seen at one time was three. Yesterday there was 20 cars. And earlier in the day I spoke to the Police Chief and he said over the weekend there were sixty!

I hike a lot. During the spring, summer and fall I probably average about 1 hour of hiking a day. What's happening at Gate 40 is not an isolated event. People are flocking to the trails. Sure part of it is because they are among the only things still "open." But I think there's also something else at work.

Most people have heard the story of a kid who gets caught smoking a cigarette so the dad (it's always the dad) makes the kid smoke a whole pack to make the kid sick of and from smoking. I think we're seeing that a little with e-media. Just a month and a half ago kids would have loved it if they basically could stay inside scroll Facebook, play video games, binge Netflix and watch YouTube videos till their heart's content. But after a couple of weeks of as much screen time as they want it's become like having to smoke that whole pack of cigarettes.

Everywhere I've hiked these past couple of weeks the crowds have been 5 to 10 times the normal. Much of the crowd being families and the kids seem genuinely happy to be out there. I haven't witnessed any crying or pouting. The kids seem happy to be out in the fresh air getting some exercise.

Will this last? Not sure. I think most people during this time of self-quarantine have taken stock in what is really important and health and family have rightly risen to the top of the list. But will it last? Again - not sure. But maybe buying stock in Merrell shoes ( a division of Wolverine World Wide) or LL Bean is worth a look-see. These new hikers are going to need good boots.

Posted by chris at 6:50 AM
Email ThisBlogThis!Share to TwitterShare to FacebookShare to Pinterest
Labels: Hiking, LL Bean, Wuhan Virus